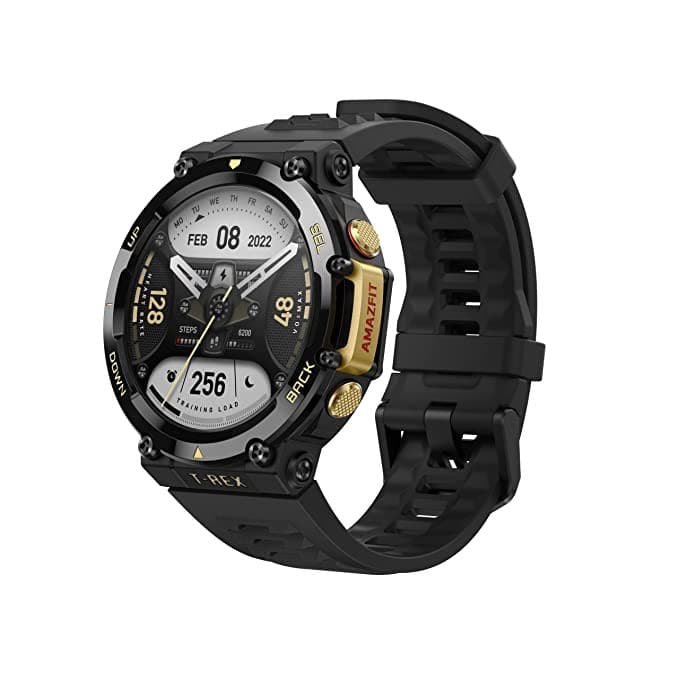 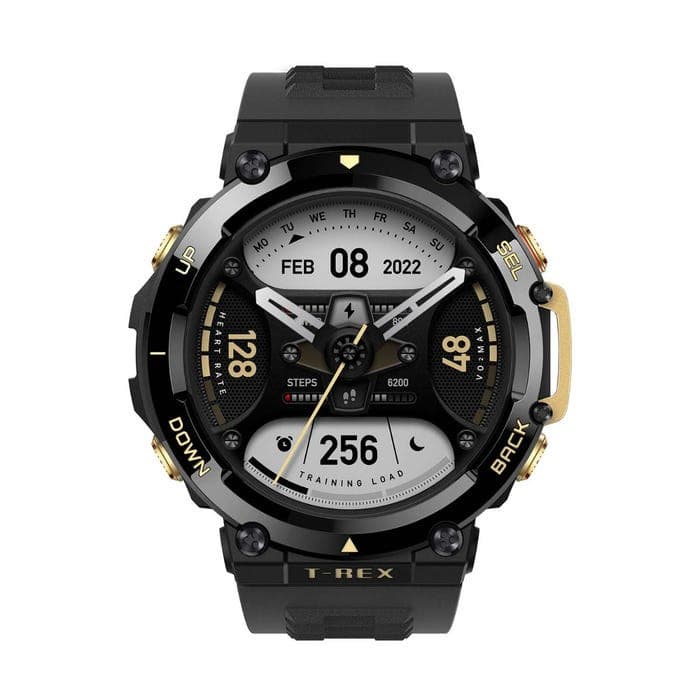 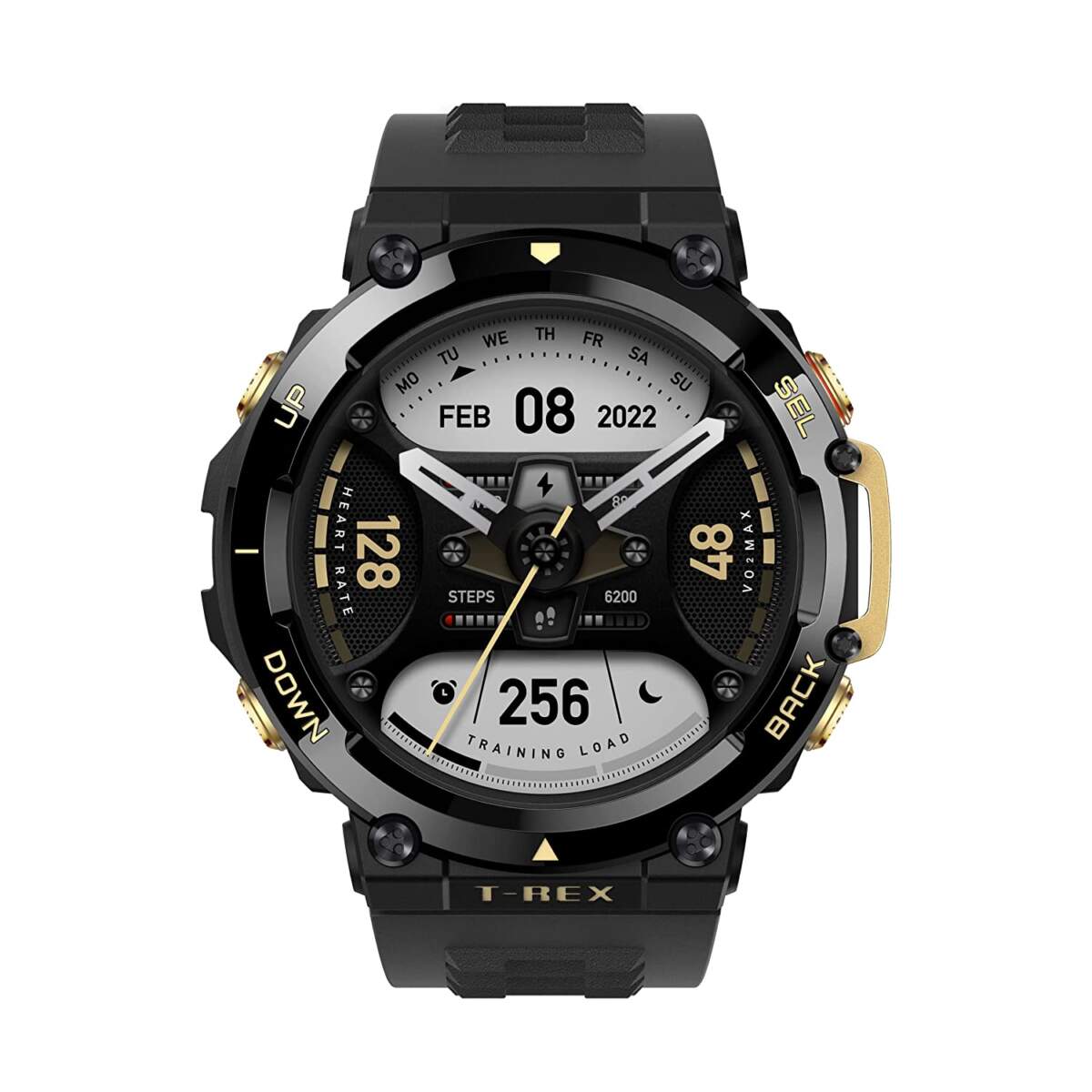 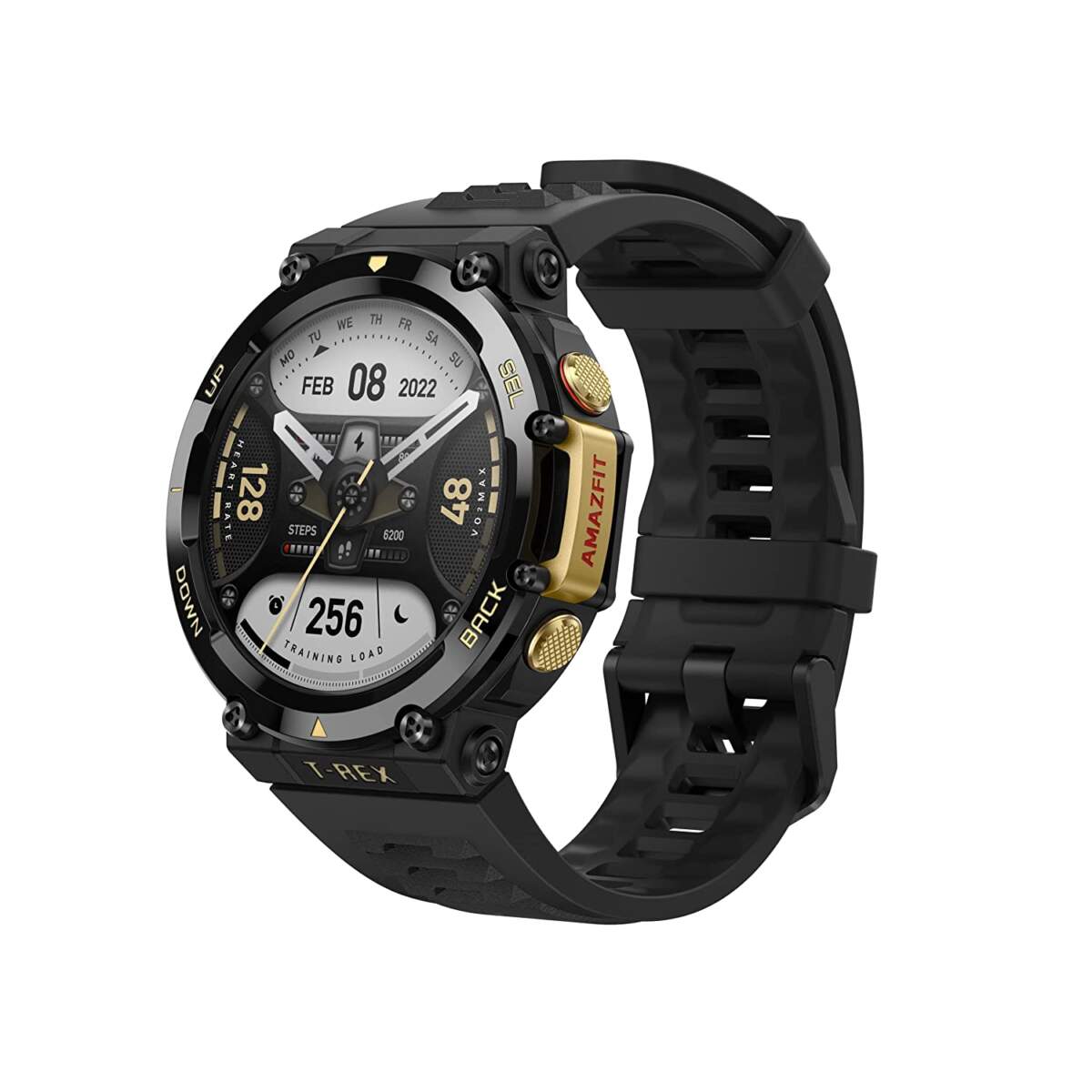 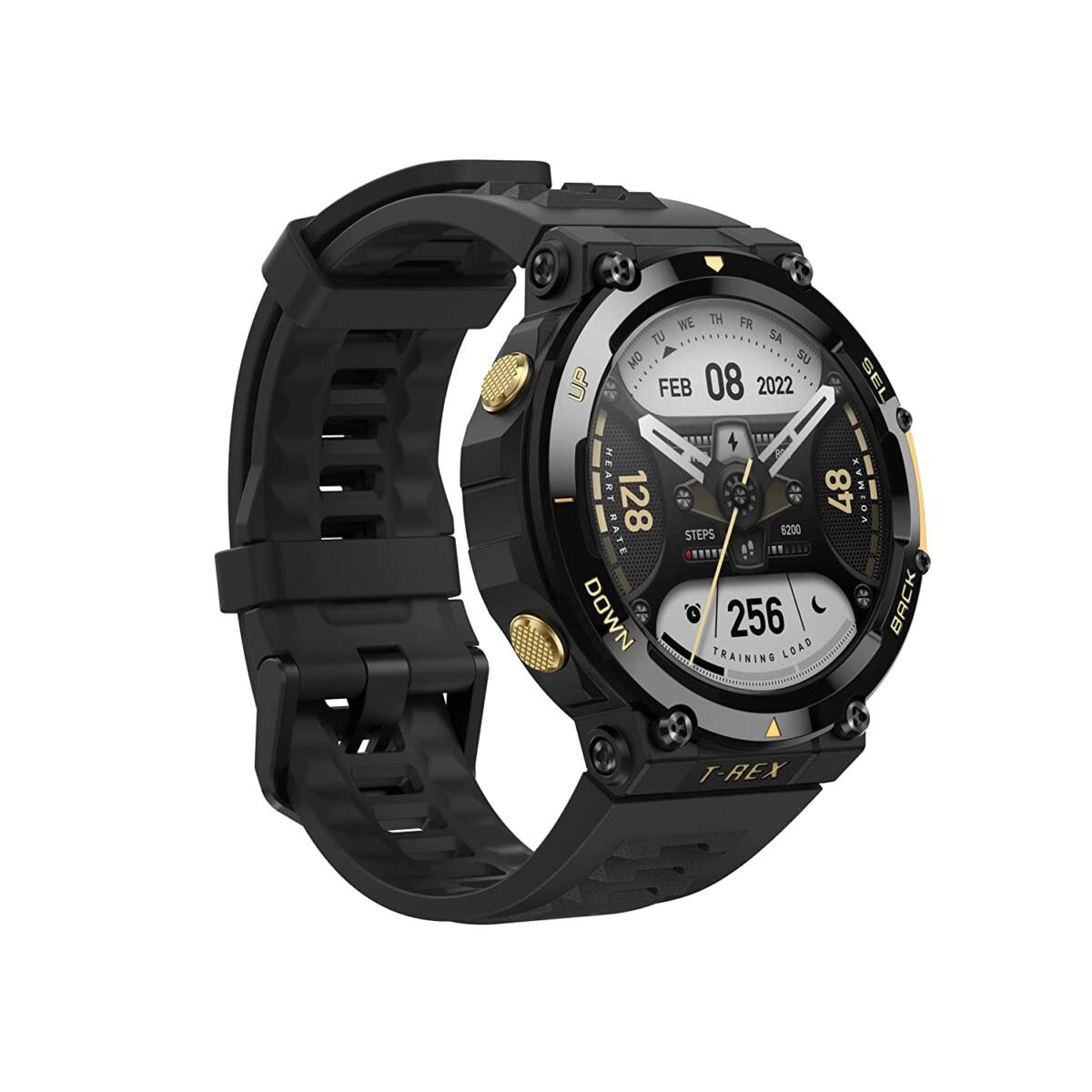 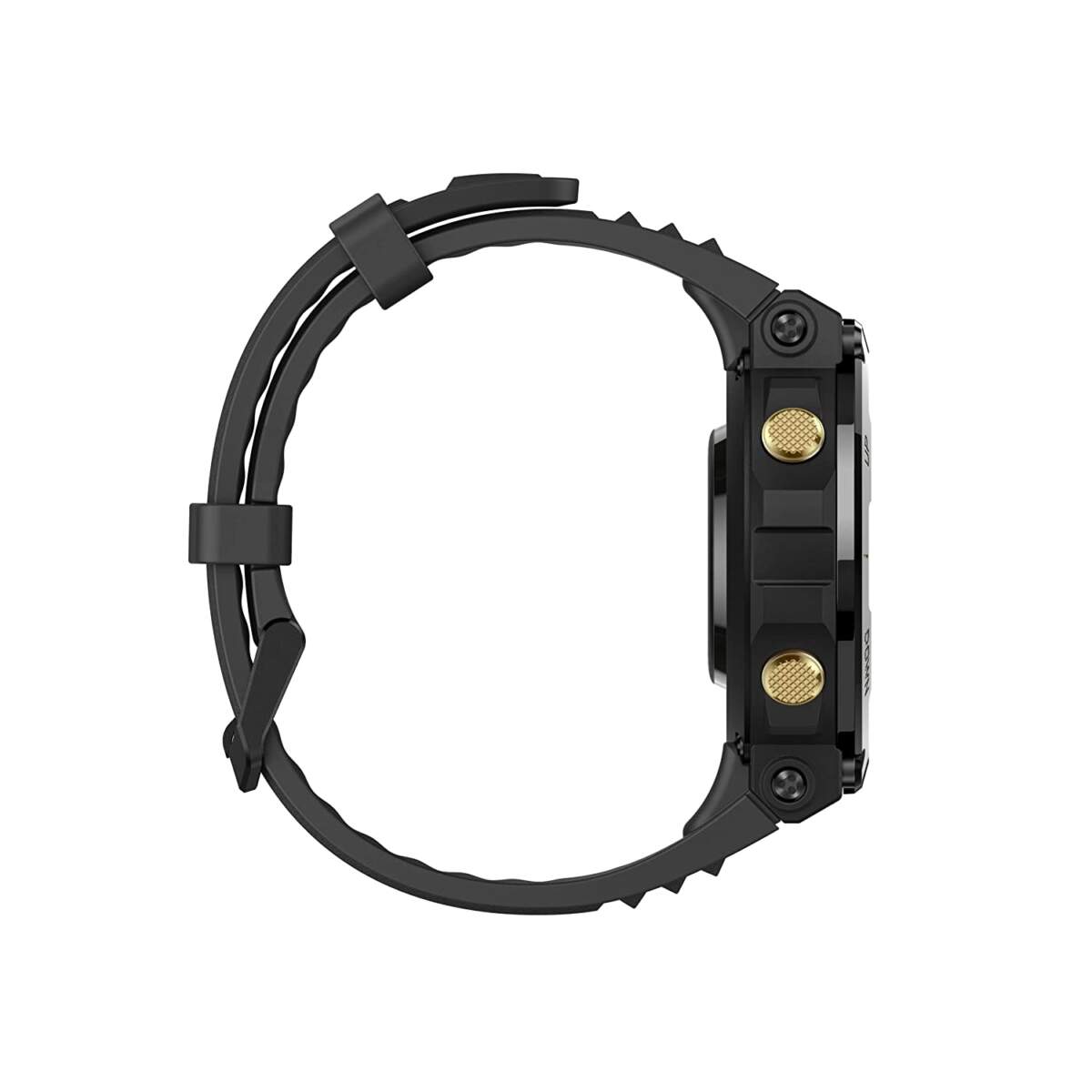 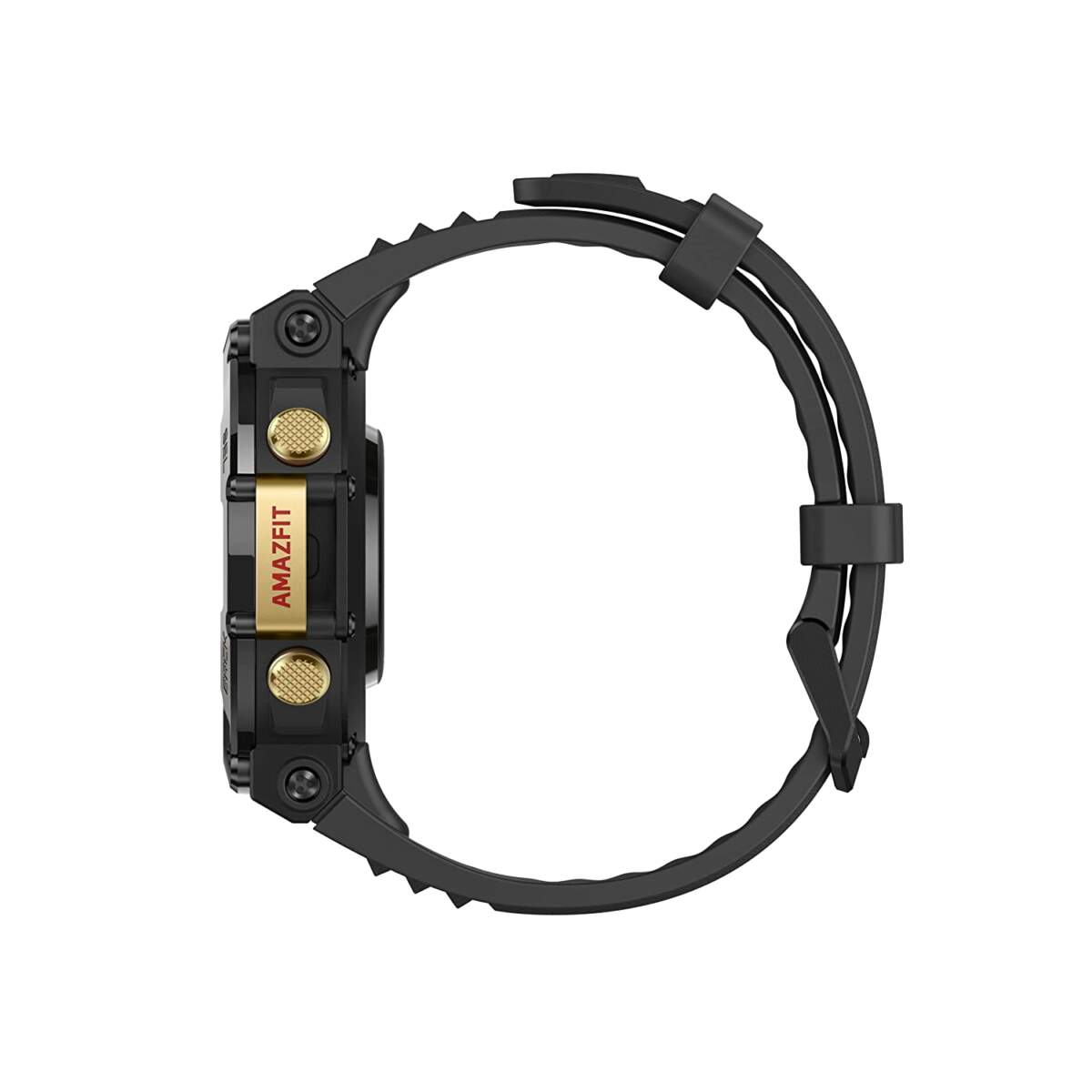 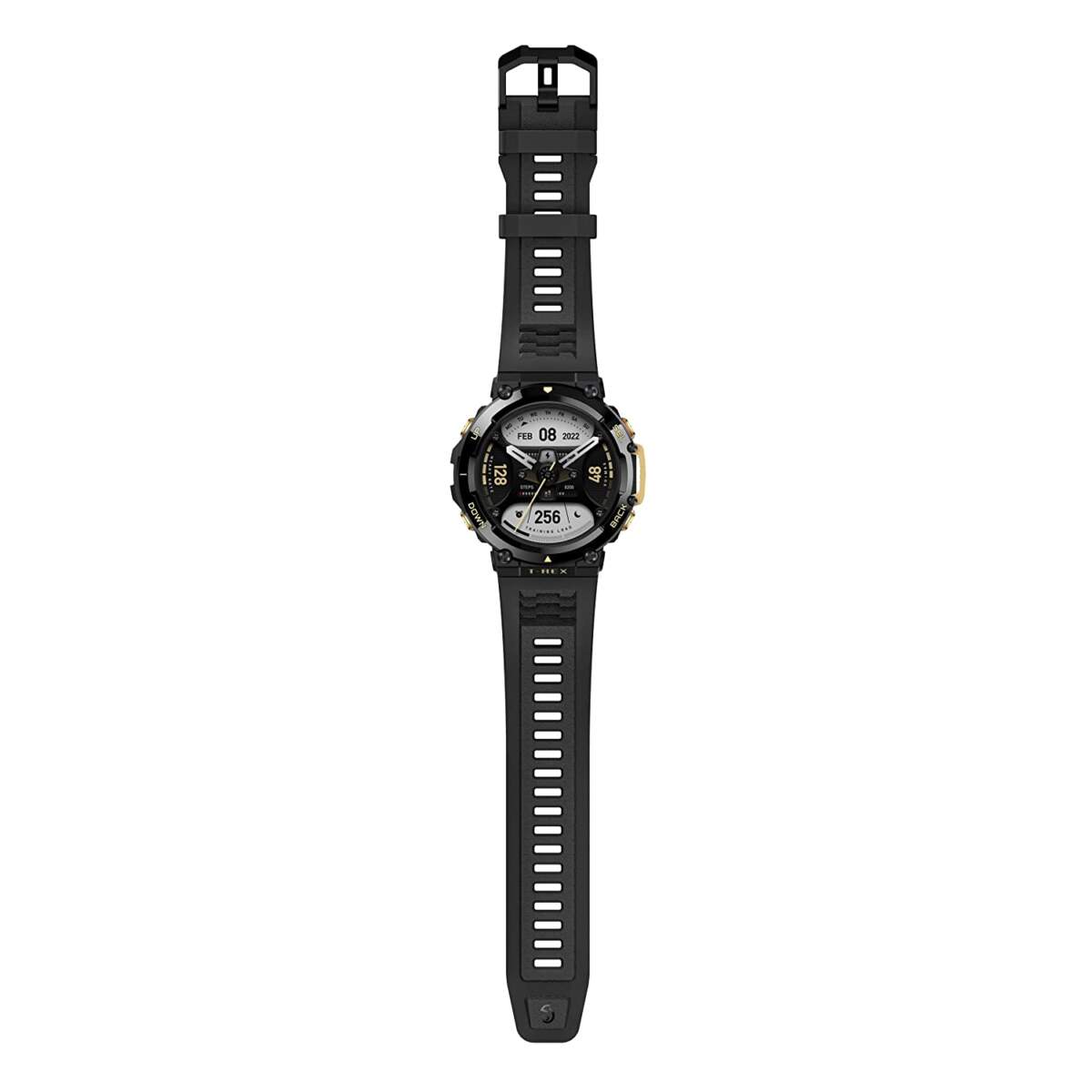 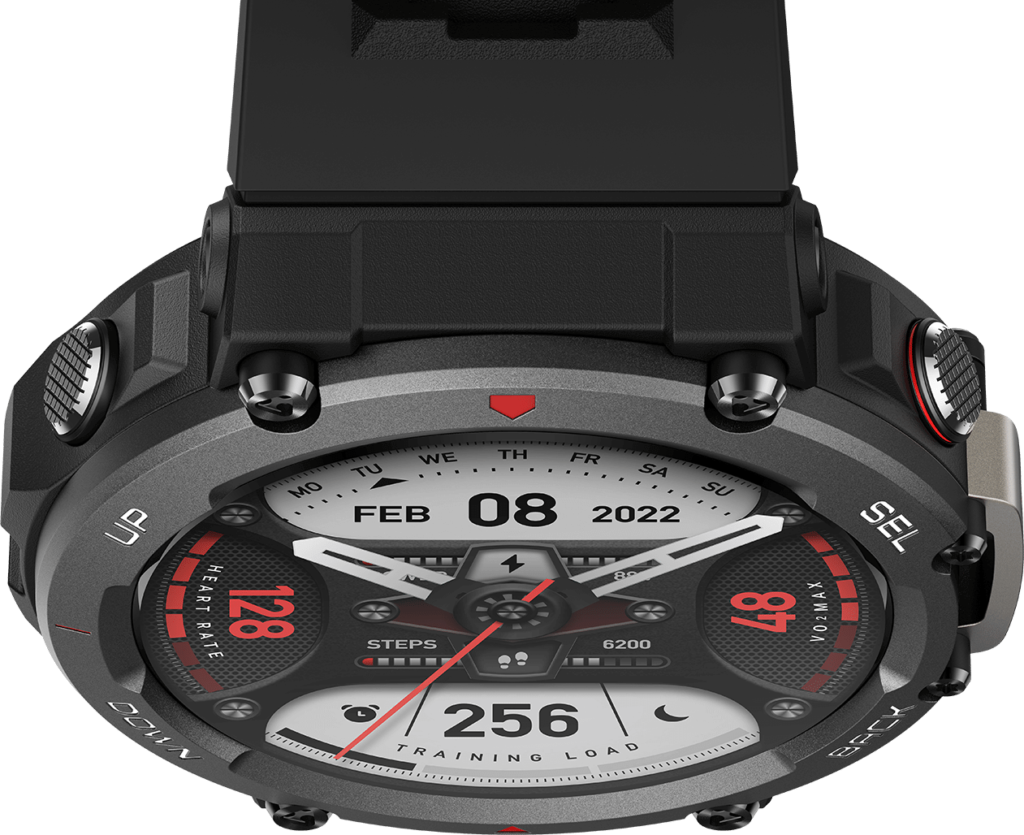 Super-tough from the Inside Out.

Experience the thrill of the hunt with the absolute titan of toughness that is the Amazfit T-Rex 2. The watch has passed 15 military-grade tests  to prove it can be right there with you in the heat of the moment on your trails through humid rainforests, up mountains, or down in icy temperatures. 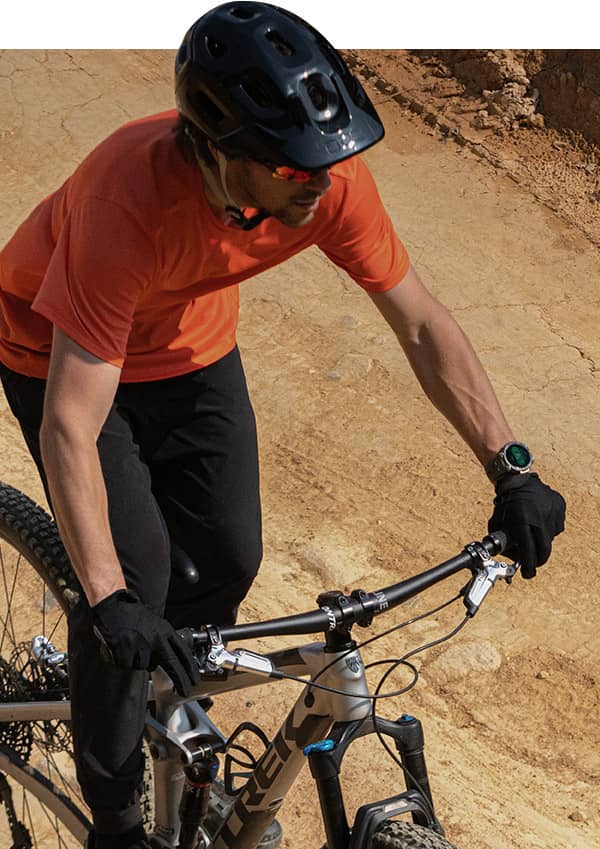 Strength That’s Out of This World.

To pass the ultimate test of toughness, the Amazfit T-Rex 2 was sent into the extreme and unpredictable environment of space, where it survived air pressure 0.2% that of sea level on Earth, and temperatures as low as  64°C. During its two-and-a-half-hour round trip, the smartwatch reached a peak altitude of about 113,000 feet before returning to Earth at speeds over 180 miles per hour.

The bold and trend-setting look of the Amazfit T-Rex 2 is inspired by the spirit of nature. The HD AMOLED display is as clear as the purest ocean, and lets you reflect the wonders of the wilderness or the untamable urban jungle through dozens of watch faces with matching always-on displays. Download your favorite from the Zepp App, or even upload a unique image that means something special to you. 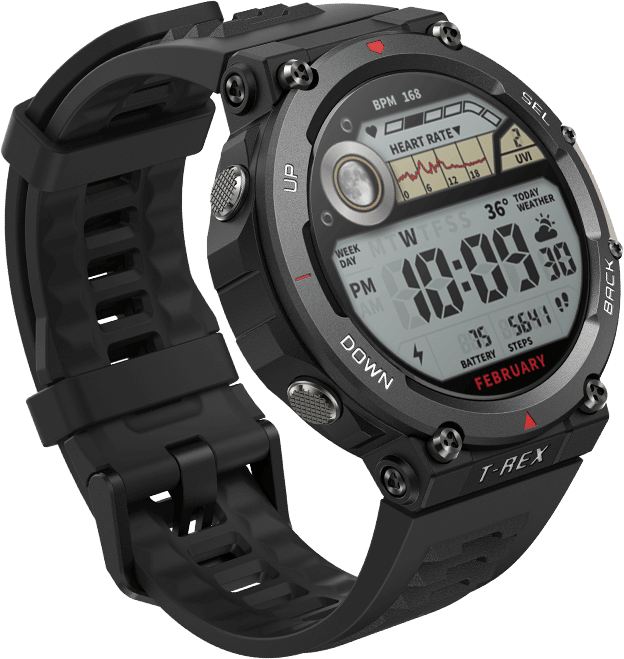 The Amazfit T-Rex 2 has evolved to feature a large screen that makes it easier to see the data that’s vital to your adventure – whether you’re under the desert sun, the city streetlights, or camping out in the moonlight. The watch’s matte finish and metal-sprayed outer bezel are also complemented by a sweat-wicking silicone strap that keeps the watch dry and comfortable as you brave the elements.

The Power to Endure Any Adventure.

With a battery powerful enough to endure adventures up to 24 days at a time with typical usage, the Amazfit  T-Rex 2 is brimming with the energy you need to go on the hunt for adventure.

Go beyond adventure with the watch’s dual-band positioning and support for five satellite positioning systems, which can effectively reduce environmental interference and achieve more precise positioning. Hikers, climbers, and explorers of any fashion can also conquer new heights and discover new paths with the T-Rex 2 s built-in compass and barometric altimeter. Route Import and Real-time Navigation Want to hike a famous trail, or follow in the footsteps of someone you know? Unleash your inner explorer and tread new ground by importing route files from the Zepp App. Your movement along an imported route, and even your unique movement along your own developing route, can be displayed in real-time directly on the watch. 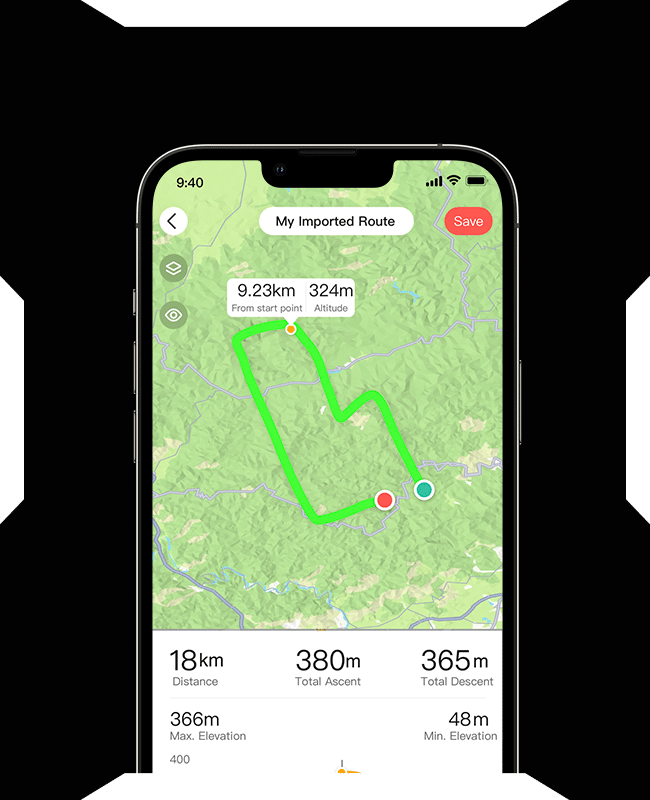 Ancient Greek philosopher Archimedes famously said that the shortest distance between two points is a straight line. With that in mind, the Amazfit T-Rex 2 can show you the shortest straight line back to the start of your journey, so you can avoid the twists and turns when you’re in a hurry. 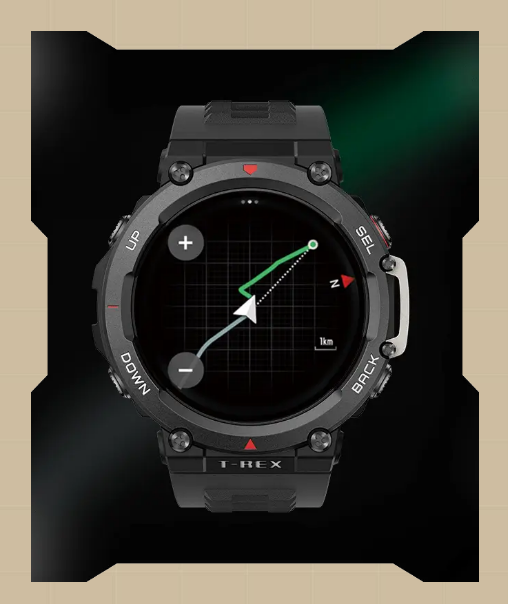 The Amazfit T-Rex 2 can automatically recognize the movements and count the reps of dozens of types of strength training exercises, many of which have adjustable variations in the Zepp App, as well as track your rest time between sets to keep your training efficient. After finishing the workout, the Zepp App will visually show you the muscle group you exercised and how long you exercised it for, so you can make sure you hit intended muscles for long enough. 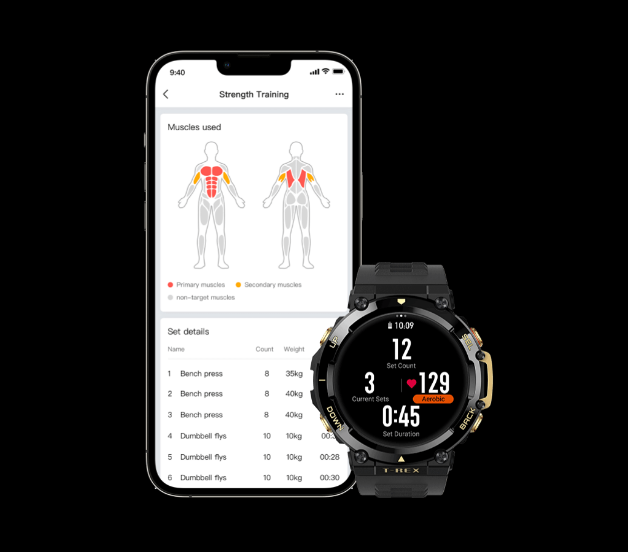 Blaze Your Own Trail with Training Templates.

Consistency is the key to success. Create your own training templates for 11 different sports in the Zepp App, which you can follow on your Amazfit T-Rex 2. Each template can be divided into Warm Up, Training, Rest, Recovery, and Warm Down stages – which can be repeated up to 30 times per template. You can even arrange for the watch to send reminders or automatically change training stages based on your heart rate, workout duration, calories burned, and more. Interval training templates can also be created directly on the watch. 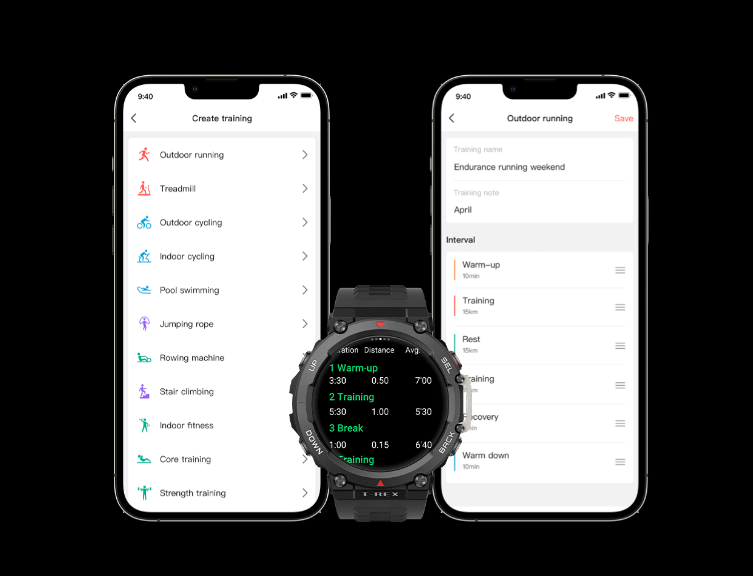 Understand What You’re Capable Of. 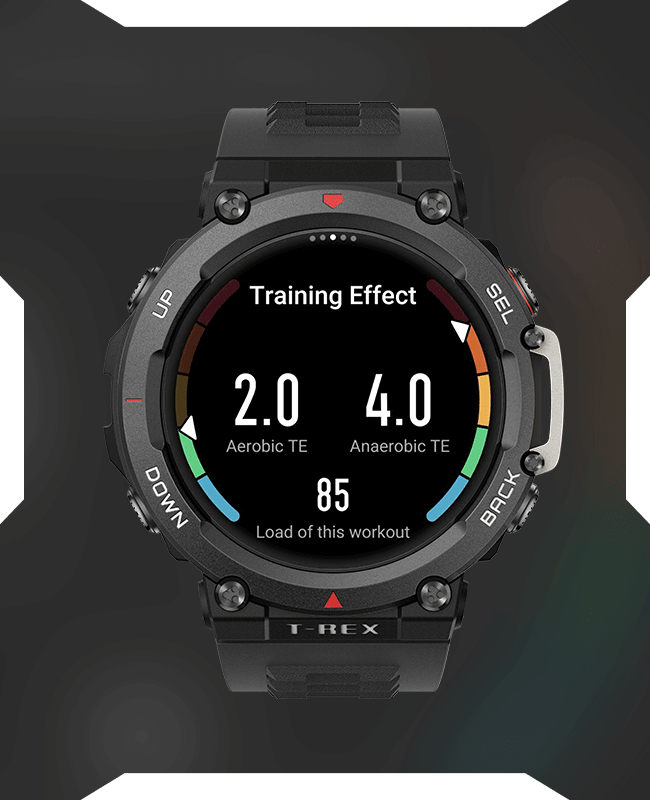 The Amazfit T-Rex 2’s huge selection of over 150 sports modes includes the toughness-testing Triathlon mode, the professional lap-data recording Track Run mode, with smart trajectory correction, and the more leisurely Golf Swing mode. Whatever activity gets you going, you’ll likely find a mode for it on the T-Rex 2. 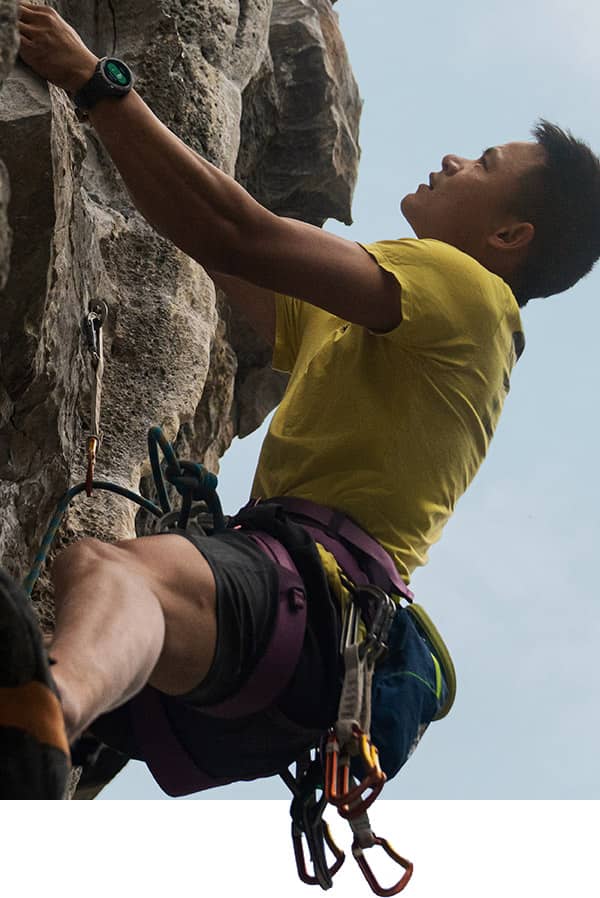 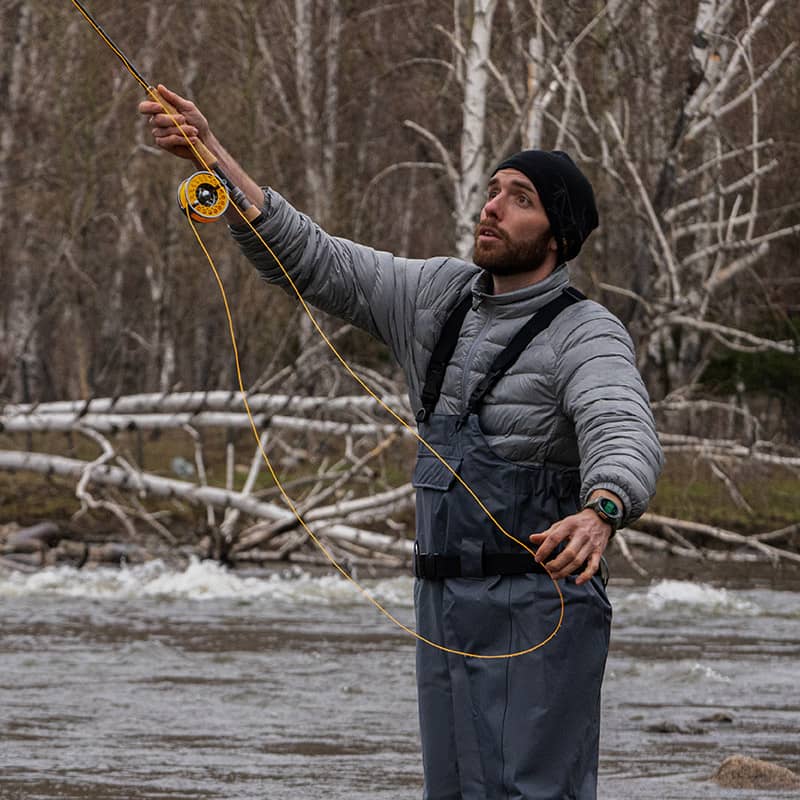 Roar into action quickly and easily. As soon as you begin one of these eight sports, the watch will sense your movement and automatically11 suggest that you open the corresponding sport mode. 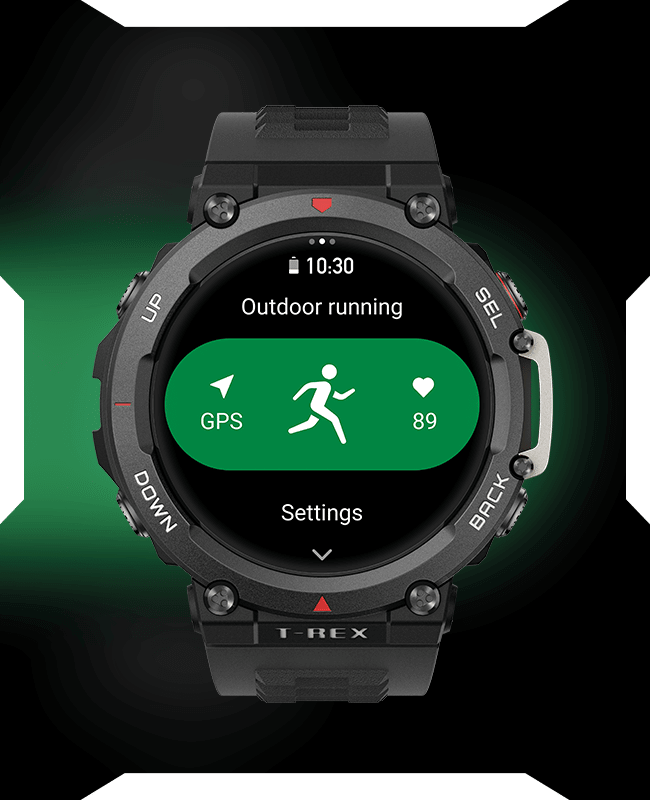 Brave the Storm with 10 ATM Water-resistance.

For those with a sense of adventure that never gets drowned out, the watch has a water-resistance grade of 10 ATM, meaning it can withstand the equivalent of 100 meters’ water pressure. Brave the rain, rule the pool, and conquer the ocean with the Amazfit T-Rex 2. 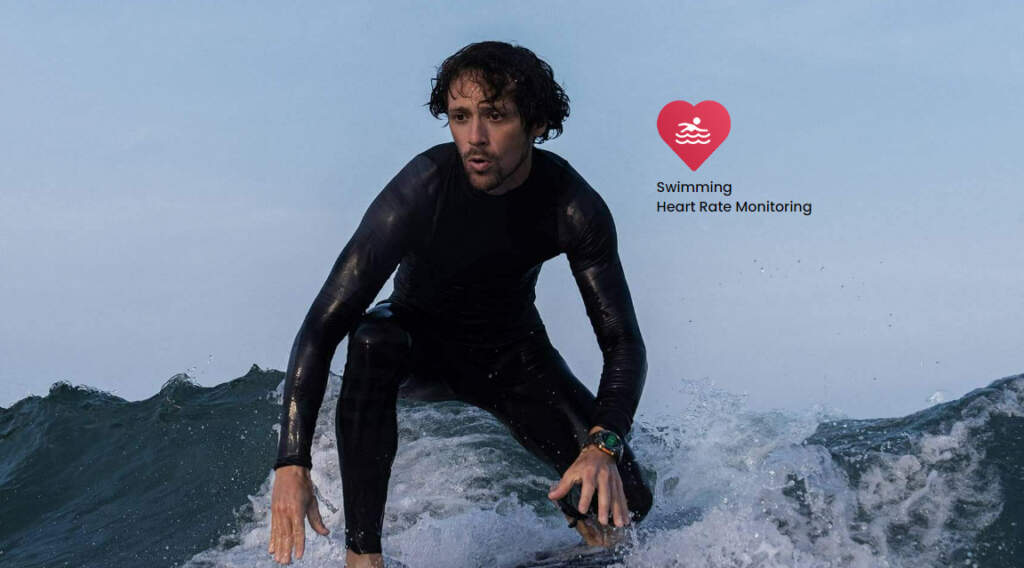 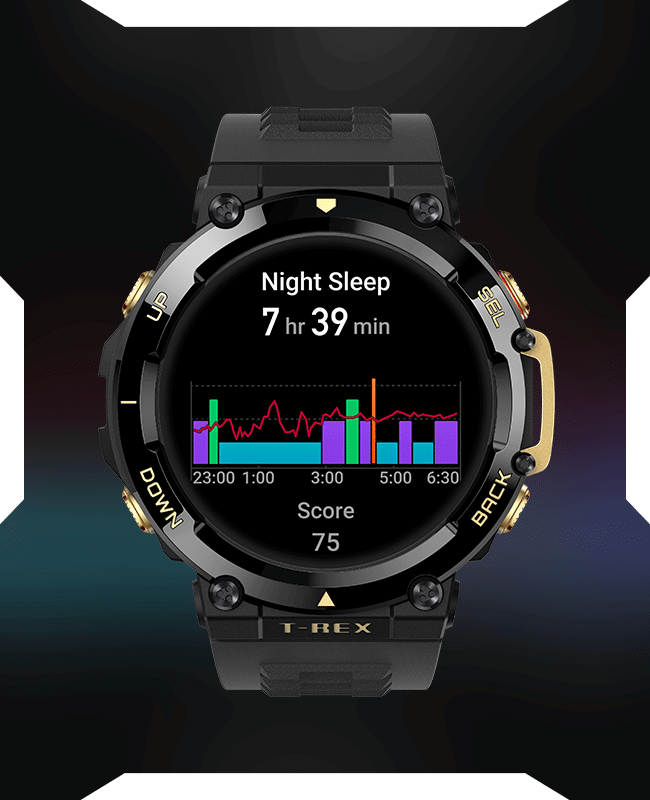 The Zepp App on your phone conducts health and exercise data display and analysis, features a watch face store, provides system updates for your watch, and facilitates smart device management.